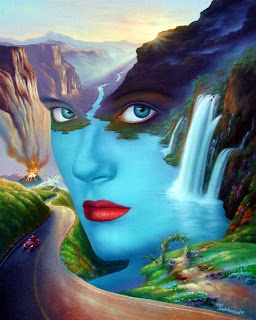 Each month I host an open teleconference on some topic of interest to Edgewalkers.  The purpose of these teleconferences is to help grow our Edgewalker community and to support and inspire people who feel called to live on the edge of what's possible in the world.


This month's topic was "Edgewalkers as Visionaries."  Visioning is one of the five qualities of an Edgewalker, and Edgewalkers literally have visions.  They are deeply interested in the potential of the future and have a longing to contribute to a better world.  This longing is natural in all human beings, but is definitely more pronounced in some people.  Often it is the result of some difficult and life transforming event that resulted in personal suffering.  The Edgewalker is motivated to help prevent that suffering for others by some positive action in the world.

In our call this month, we explored the question of "What enhances your ability to be a visionary?"  Caring about the future, and believing that a better future is possible is essential.  One resource that inspires the possibility of a better future are the audio programs on www.integralenlightenment.com.  Or read John Renesch's book "Getting to the Better Future."  Or view the Stephen Pinker video on "The Myth of Violence,"  http://www.ted.com/talks/lang/en/steven_pinker_on_the_myth_of_violence.html.  Edgewalkers look for evidence of the evolution of human consciousness, with the belief that what you pay attention to grows.

Many people assume that visionaries are impractical, but Edgewalkers are known for their ability to have visions and then to manifest them. Tom Anderson describes a vision as feeling like you are receiving a direct electrical charge of electricity from a power plant, and that the only way you can communicate it to others and move forward is to step it down through a series of transformers.  Others speak about the manifesting process as one of breaking things up into smaller, manageable steps.  A critical factor is having a community or a coach that helps you clarify your vision and holds you accountable for actions that you say you will take.

I would love to hear from you about any examples of a vision that you have been able to make into a reality.  ﻿
Posted by Judi Neal at 7:19 PM

Just getting acquainted with the notion of Edgewalkers, although I stuck to edges in everything I did pretty much all my life. Nice to have a term for it.

I'm exploring visioning in a number of ways. I especially like focusing and naming things that we all do but don't pay enough attention to. I think that we all have visions regularly, but we fail to communicate them because our thresholds to opening up are too high.

For example, a friend might be confiding a fear about something to me. As she is speaking, I get a little video in my head of her acting confidently or her face with an expression that shows she overcame the fear. I used to keep little visions like that to myself and, motivated by what I saw, found other more "rational" ways to encourage people towards confidence or solutions. Now, I just say, "I just saw you in such-and-such a place, doing this-or-that, and you seemed confident," or the like. It's no more than a little clip in my head, and I don't try to make it out as anything more. Paul the apostle wrote that we can all prophesy, not that we can all claim to be prophets. ;-)

The problem with "waiting until we're sure" or for something extraordinary to happen before we share things like that is the loss of cadence. If I debate and wait until later to mention my little video, that's better than saying nothing, but what if, just at the point when I saw it, my friend was in a head/heart space where hearing about it would have made some very cool connections for her? For example, maybe she had a little video going on as she was telling me about her fear, in which she saw herself faced with her problem and feeling shaky. Right then, I tell her that I see her acting confidently. My suggestion triggers a change in her video, and she sees herself differently, stronger. Maybe there are details about what I see that ring true for her and trigger helpful associations. None of that might happen at a different time.

I have no idea what the significance of my little videos are, because the significance is for others, not me. But they might not get the full significance if I wait to share it. There are so many things we could tell each other if we were alright with just saying, "This is what I see," instead of trying to say more or saying nothing because we can't say more. I often wonder how much wonderfulness of life gets lost simply because we don't pass simple things on.

Greetings Ms. Neal.
I was saddled with the name 'Edgewalker' while riding with a motorcycle club in the mid 1970's. I was living/riding right on the very edge, always.
I too had visions that were way more than a 'video'. They were waking visions that I could not tell from reality, disconcerting while riding a bike but I guess that's the price for the Edge. Sight, sound, smell were all there and some were life saving for me and others.
Some were of future events and involved either me or riding brothers and their families. I was asked to move on because of these visions and their accuracy. Guess they were afraid I might 'see' something they held private.
I have used these 'visions' to help center myself and assist others in their quest for peace. I am humbled by my gift and have a limited ability to guide the insight but they mostly just happen and I just listen and watch as they roll over me.
Thanks for reading this, I'm glad there are other edgewalkers out there and keep up your quest to bring others peace and understanding. There can be no higher calling.
Respectfully,
JD Day
Edgewalker

Judi Neal
I received my Ph.D. in organizational behavior from Yale University in 1985 and was a manager of organizational development and training for Honeywell in the 1980s. I am Professor Emeritus at the University of New Haven and was the founding director of the Tyson Center for Faith and Spirituality in the Workplace at the University of Arkansas. I am currently Chairman and CEO of Edgewalkers International, and am the author of four books, including the book "Edgewalkers."